OpenSwitch (OPX) – an open source network operating system (NOS) and ecosystem - is an early adopter of emerging concepts and technologies (hardware and software disaggregation, use of open source, SDN, NFV and DevOps) which disrupt how networks and networking equipment are built and operated. Designed using a standard Debian Linux distribution with an unmodified Linux kernel, OpenSwitch provides a programmable high-level abstraction of network components, such as switching ASICs (Network Processors) and optical transceivers. Architected as a scalable, cloud-ready, agile solution, the open source OpenSwitch software implements a flexible infrastructure to enable both network operators and vendors to rapidly on-board open source Networking OS applications. OpenSwitch provides a YANG based programmatic interface, that can be accessed using Python, thus providing an environment well-suited for DevOps.

OpenSwitch (or OPX) provides an abstraction of hardware network devices in a Linux OS environment. It has been designed from its inception in order to support the newest technologies and concepts in the networking industry:

OpenSwitch supports a rich ecosystem for automated deployment, for instance:

The OpenSwitch CPS programmatic interface is defined using YANG models, and in combination with Python, provides support for programming the network functionality, automation and DevOps. While the CPS API is the native OpenSwitch API, a REST API can be added as well, by mapping REST requests to CPS.

In addition, a set of OpenSwitch specific commands are available and can be invoked from a Linux shell (e.g. display the current software version, hardware inventory etc.).

The figure below illustrates the main areas of the OpenSwitch architecture: 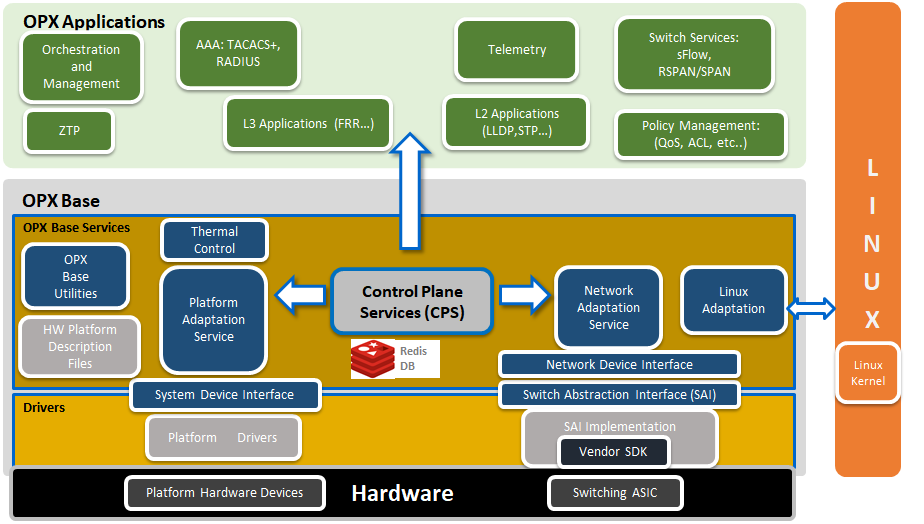 The key components of OPX Base are:

A variety of open source or vendor specific applications have been tested and can be deployed with OpenSwitch:

It should be noted that these applications are not pre-installed with OpenSwitch. In a "disaggregated" model, users select applications to install them based on the requirements of a given network deployment.

In general, since OpenSwitch is based on Linux Debian distribution with an unmodified kernel, any Debian binary application can be installed and executed on OpenSwitch devices.